Using Builder to create your experiment¶

Compiling your experiment to python or JavaScript¶

A first step to combining your code with a Builder is to compile a builder script to coder and peek what’s “under the hood”.

Compare this with scripts you may have written:

NB. If you actually need a dollar symbol to be in your text, do:

e.g. a shape that tracked the mouse by setting the shape position to be mouse.getPos()

This goes to the next step in integrating code with your experiment. You can add code in either python or JavaScript (JS). By default, python code will be transpiled into JavaScript. 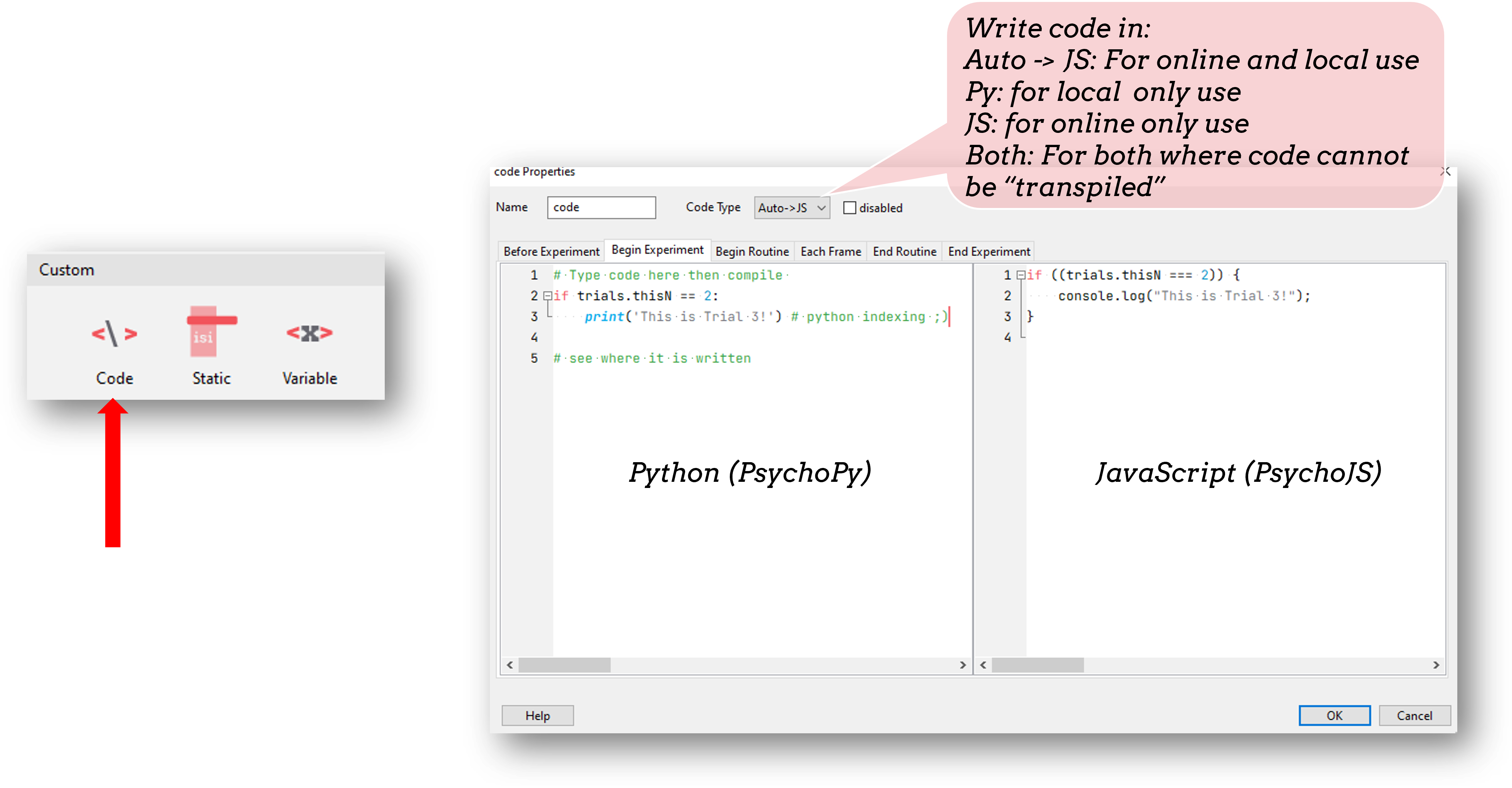 Handy side tip. If you want to see what properties and methods an object has, you can use dir() for example to inspect the properties of the mouse you could use print(dir(mouse)).

If you want to learn more about a method in an object you can print the docstring for that method print(mouse.setVisible.__doc__)

The dir() method is a python specific function - so be careful if you leave that in your code when pushing your experiment online!

Trial-by-trial (from a key press)¶

When we use a keyboard component for our responses, there are a few variables returned on the key press:

Following this you could use a code component to give response dependent feedback:

Using $feedback in a Text component.

Overall feedback (from a key press)¶

In the Begin Experiment tab, we could use:

Then in the End Routine tab we could use:

Finally, at the end of our experiment we could add a text component and use some code in the text field:

If you want to be kind to future you, you could even save this summary variable to your data file by adding a code component to your last routine:

To show the participant the time into a trial, we don’t even need a code component. We can add a Text stimulus, and in the Text field write str(t) (t is a special variable that lives under the hood of PsychoPy, it indicates the time since the trial started) then make sure to set the field Each frame. This is a good example of converting variable “types” in python:

This might return a value that is quite long, so, to round that we could use round(t, 3)

Ending a set of trials early¶

Imagine we want a set of practice trials, that will end when your participant gets 5 correct.

You can use the code trials.finished = True to end a loop early. So, you could say:

Ending or skipping a routine¶

Imagine we want to skip a routine/trial (for example to only show a routine on some trials). You can add a code component and use:

To end or skip a routine.

This can be extended to insert a break. The modulus operator % can be used to say if a number has any remainders following a division, so, if we want a break every 5th trial we could add a routine in our trial loop called “breakMsg” and add a code component with the following in the begin routine:

Note that we add 1 because python indexing starts at 0.

Add a Routine to the start of our experiment called “consent” and add two clickable images (one called “Yes” and one called “No”). Then add a code component, and in the End Routine tab, write:

Imagine you have 4 images to present in 4 locations. On each trial, you want the location for each image to be selected randomly. You could add a code component, and in the Begin Routine tab write:

It is really handy to be able to save custom variables to our data file. Following the example of randomizing image position, we could save the xlist to our data file using thisExp.addData('xList', xList) the function addData() takes 2 arguments - the first is the value for the column header in the output file, the second it the value of the variable to save.

How is PsychoPy counting trials?¶

Each loop we add to our experiment will automatically be counting the number of trials that have occurred already (as well as how many repetitions of our trials list have occurred!). Run your experiment and have a loop at the output. You will see some useful information in the headers of your file.

Now we know how PsychoPy counts trials, we can use this info to add a trial counter and show how far through the experiment participants are. Add a text component and position it in the top left (in height units pos = (-0.4, 0.4)). In the text field add $'Progress: ' + str(trials.thisN) + '/' + str(trials.nTotal).

Keeping track of time is really important to most experiments. In PsychoPy there are many useful clocks that live “under the hood”, which we can use in our experiment:

If we want to use a custom clock (e.g. to measure the time across several routines) we can always make a clock within a code component:

In the current release (2021.2.3) if we are working online we will need to change our code component “type” to be “Both” and use myClock = util.Clock() on the JS side.

Useful methods for use with clocks¶

Once we have our clock there are several useful methods we might want to know about.

Adding a timer to your experiment¶

Now that we know how to make a clock and how to access the time on it, we can easily add a timer to our experiment to show our participant how far into a trial, or the experiment they are.

Add a text component to your trial routine and position it in the top right corner (in height units you will want something like pos = (0.4,0.4). Then in the text field all we need is to write $t and set every frame.

Depending on your PsychoPy version you might need to use t - omitting the dollar sign. Remember that you only need a $ at the start of a field if there is not already a $ int he parameter name.

The properties of the text component should look like this: 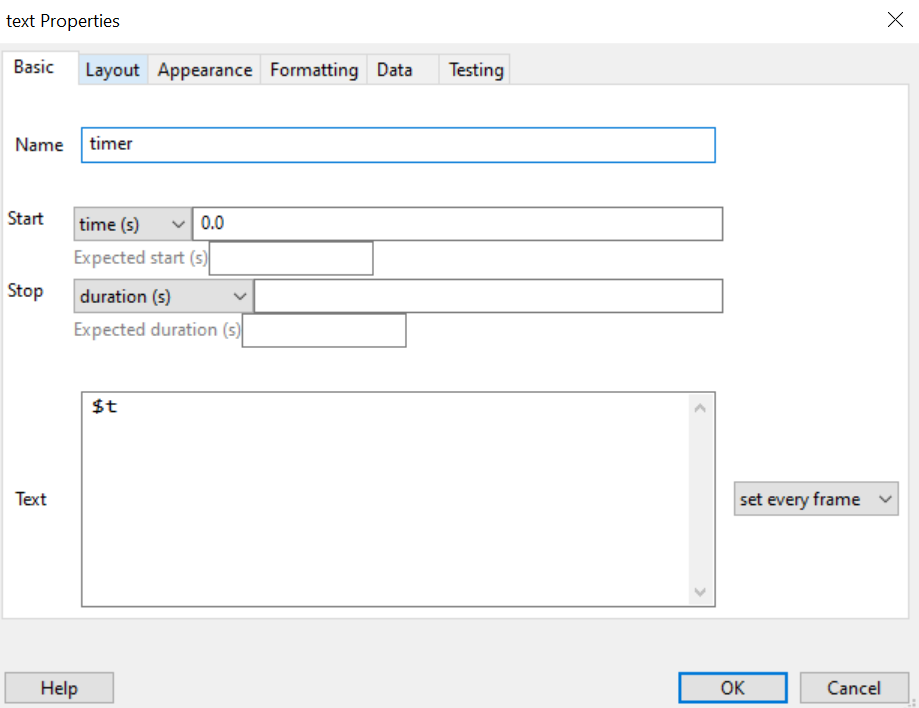 OK now you should have a timer to show participants how far through a trial they are!! If you wanted to show them how far into the experiment they are you could add a code component and in the Begin Experiment tab write expClock = core.Clock(). Then in your text component replace t with expClock.getTime().

OK so we have covered the basics of making a task and how to do exciting dynamic things with the mouse. Let’s touch on a relatively new response type…

Let’s practice what we know about mouse inputs to make a dot to dot demo. Participants will see a set of polygons and connect them (this allows us also to try the brush component!). When the mouse enters a polygon change it’s colour.

If you still have time Repeat our dot-to-dot trial 3 times and present the dots in new locations on each trial. Use a clickable button to end each trial.

We have already seen how we can use ‘conditional if’ statements in python. And we could just use several of these statements to check if the mouse is in each polygon individually e.g.:

Alternatively, we could use a ‘for’ loop…

For loops allow us to repeat the same set of code over a predefined n or over a set of objects. e.g.:

To take this online we need a slight edit:

For useful tips on getting things online use: