In this demo we will work through making a Posner task in PsychoPy you can download the materials here (open builder > posnerTargets).

What makes a PsychoPy experiment?¶

A builder experiment has three main sections. To start making an experiment we add routines to our flow and add components to our routines. 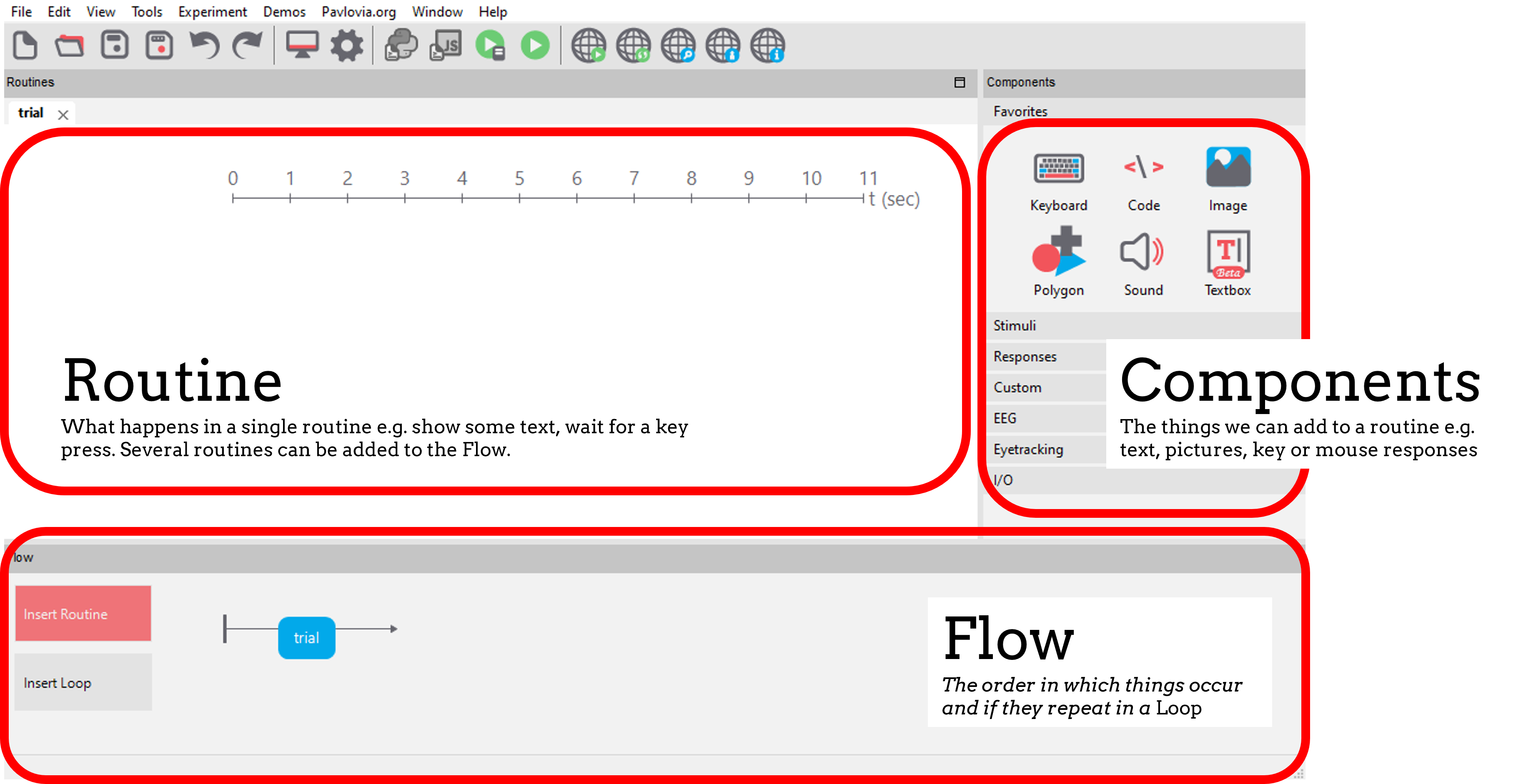 If you are going to change something on every repeat of a routine (e.g. stimulus location on each trial) you can use a Conditions file. This is fed into the loop surrounding the routine.

Each header is a variable, each row corresponds to the value of that variable on each repeat/trial.

Then make sure to use that variable to set the parameter of a component on every repeat of your loop. 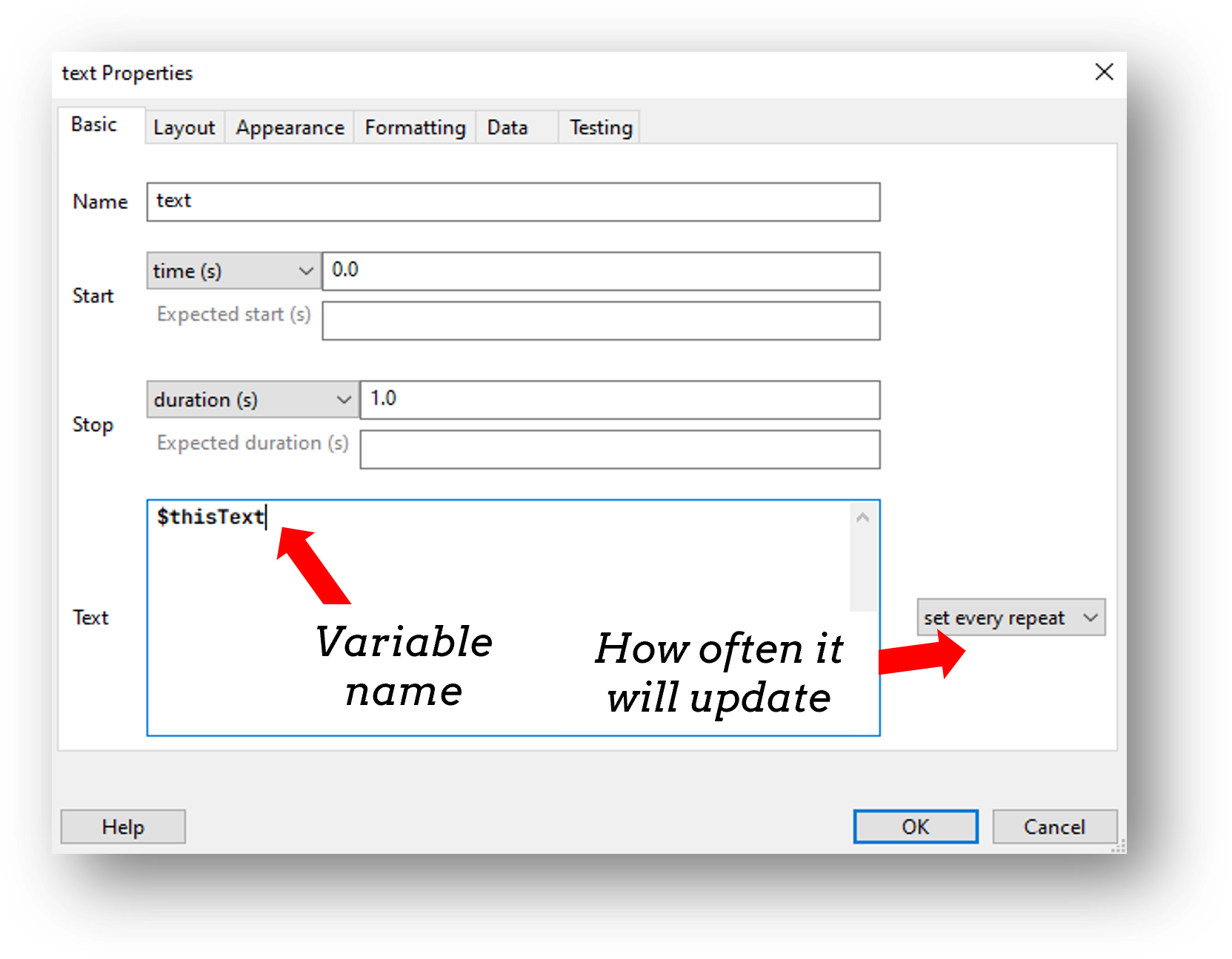 We could add a basic routine, but we could also add a loop around our instructions routine to iterate over a set of instructions (with that loopType set to “sequential”).

Every experiment starts with a dialog box to gather some info about the participant/experiment. By default “participant” and “session” are gathered - and these are used to set the filename of that participant. 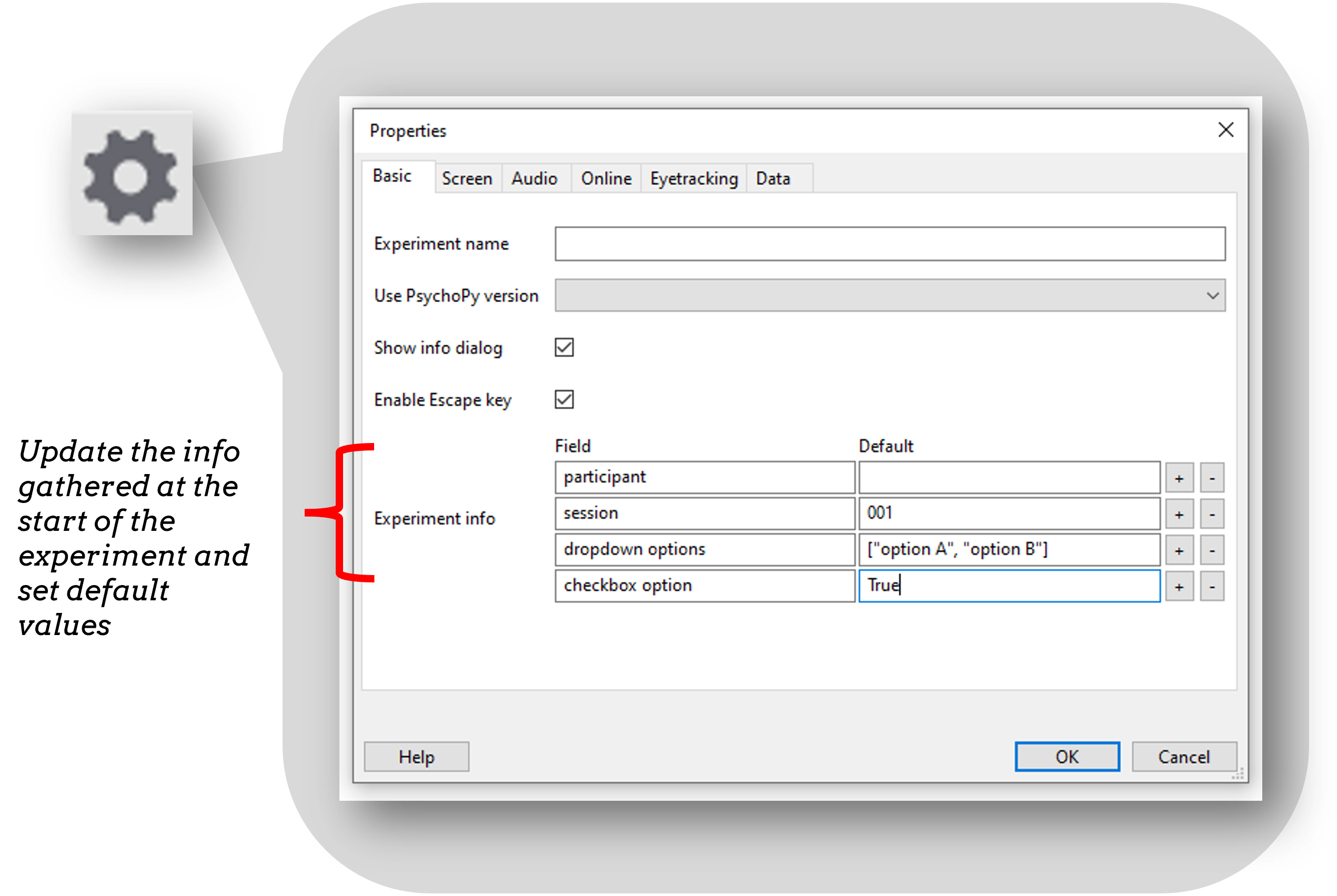 In the current release (2021.2.3) check box options are not yet supported online.

When you are finished, come back to the main session and collect one run of your task so that we can talk through the data file.

A block design is where we have sets of similar trials organized into blocks rather than having trials interleaved.

When people have several “blocks” the natural move is to add separate routines for those blocks:

However, if both blocks contain the same stimuli/elements (e.g. a Posner task with a fixation, cue and image, but where the position of the cue varies between blocks), this is not the most efficient approach. 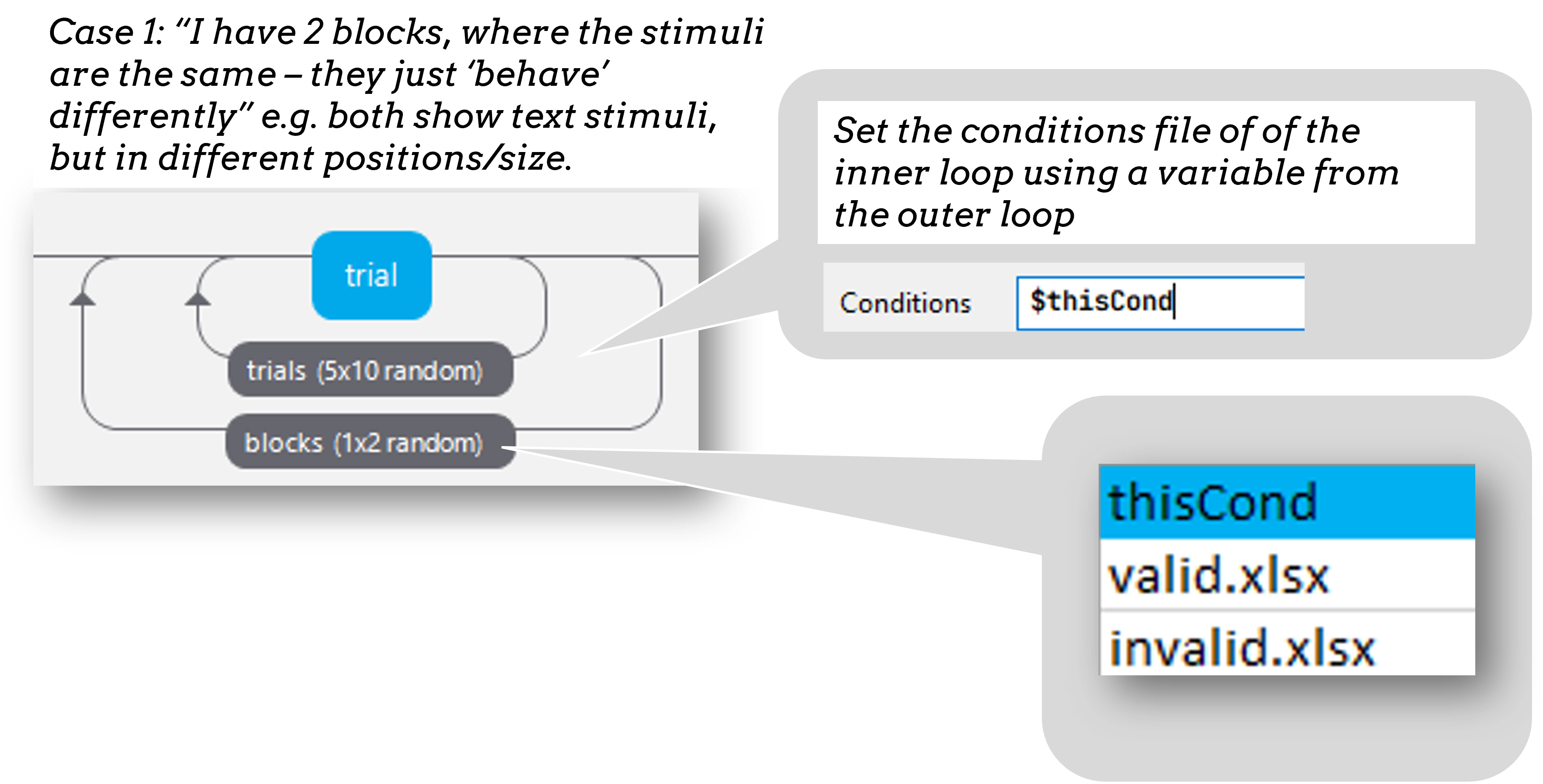 If you do have 2 blocks that contain very different stimuli the approach to take is to control the number of times each block repeats using an outer-loop.

Using what we know about blocks, we could add a routine to tell the participants what kind of block they are about to enter. If our blocks.xlsx file has a column to label the condition, we can add a routine to introduce the block type.

Counterbalancing your blocks is really just an extension of the blocking scenario, except that you set the blocks to operate in a particular order rather than leaving PsychoPy to randomize them.

So, you need a file per conditions order (e.g. A -> B and B-> A), then determine which file will be used for this group and use that file in the blocks loop

Remember to set the blocks loop to be `sequential` rather than `random` to preserve the order you set.

Note: This last kind of formatting is termed an ‘fstring’ in python - we will talk about that more later. If you are running experiments online, the first method will work best

expInfo is a python “dictionary” that stores all information from the startup GUI. Fields of a python dictionary are accessed using the format dictName['fieldName']. It works the same locally and online and means you can set features of your experiment based on the input recieved at startup!

Let’s practice counterbalancing in different ways using the exercises in the folder you downloaded (“builder > counterbalancingExercises”). In “exercise 1” you will find an inefficiently counterbalanced design. We want to improve this in two phases.

Sometimes we might have to counterbalance subtasks (i.e. routines that contain very different sets of components).

For this we would use the second blocking method we described earlier. You can wrap a loop around any set of routines and control if it presents using nReps.

In the below we could control create the order C->B->A by using a conditions file where the nReps of each sub-loop are set per iteration of the outer-loop.

Where the nReps argument of each sub-loop is set using something like ‘$nRepsA’ etc.

You can now create trials and blocks in any order, fixed or random and counterbalance subtasks!

Up next Running and sharing studies online