This shows you how to make the posner task in PsychoPy

What makes a PsychoPy experiment?¶

Open the posnerHand.psyexp file. An experiment in Builder has:

If you are going to change something on every repeat of a routine (e.g. stimulus location changes on each trial) you can use a Conditions file. This is fed into the loop surrounding the routine.

Each header is a parameter, each row corresponds to the value of that parameter on each repeat/trial.

When you are finished, come back to the main session and collect one run of your task so that we can talk through the data file.

A block design is where we have sets of similar trials organised into blocks rather than having trials interleaved.

The biggest error that people make with this is to create a Routine (and a loop) for each block of trials:

Then they ask on the forum, “How do I shuffle the blocks on my Flow?”

That is the wrong way to think about it (for blocks with identical components).

Then you can set the conditions files in your blocks loop to control the block-level changes.

The outer “blocks” loop then takes a (meta) “conditions” file that specifies which of the conditions files will be loaded in each block.

Imagine we want to extend our Posner task to include a block where invalid trials occur on a higher proportion of trials.

The label variable isn’t technically needed but it could be used to tell people what block they are about to enter. The point is that you can still use other variables here, defined at the block level of the program.

Now we need to set up the variables inside our experiment: 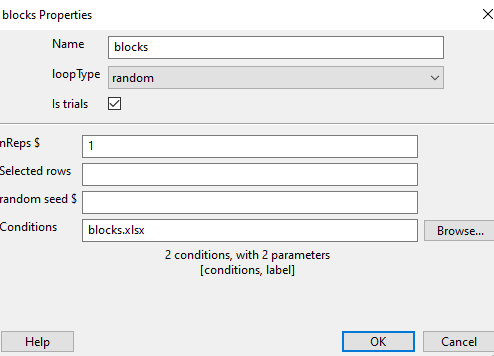 We could also tell the participants what kind of block they are about to enter, we can add a text object that takes:

Counterbalancing your blocks is really just an extension of the blocking scenario, except that you set the blocks to operate in a particular order rather than leaving PsychoPy to randomise them.

So, you need a file per conditions order (e.g. A -> B and B-> A) and then set the blocks loop to be sequential rather than random to preserve the order you set.

Note: This last kind of formatting is termed an ‘fstring’ in python - we will talk about that more later.

Sometimes we might have to counterbalance subtasks (i.e. routines that contain very different sets of components)

You can wrap a loop around any set of routines and control if it presents using nReps.

In the below we could control create the order C->B->A by using a conditions file where the nReps of each subloop are set per iteration of the outerloop.

You can now create trials and blocks in any order, fixed or random and counterbalance subtasks!

Making the most of mouse inputs